At Fullerton Merino Stud we concentrate on the two main areas that will lead to a profitable merino enterprise.

A large average lambing percentage is the first and most important hurdle. We have averaged 105% of lambs marked over the last 4 years. This gives us the ability to cull at somewhere between 35-45%. Surplus stock sales then form a large part of profitability through fertility. Again, fertility enables a greater pool of young rams to select from. A larger number creates genetic pressure when searching for superior rams and young ewes.

The second main area is fleece weighing and fibre testing every drop of maiden ewes after they have been visually culled. The bottoms 10% of fleece weight are sold as surplus stock. We class our maiden ewes three ways once culls are removed. That is, Flock ewes, Below average micron ewes (Finer um) and finally Stud ewes. Fullerton Merino Stud ewes will be above average for fleece weight, body weight, sound in micron and of course visually thorough. We identify the finer ewes so that they can be joined to a larger, slightly broader ram. This is done to achieve large carcass traits that still have an excellent medium-fine staple of wool. Our maiden ewe micron average is 17.4 um, and the flock average micron of older ewes is 18.7 um. Maiden ewe fleece weight average is 5.4 kg at 12 months. The Stud ewe average fleece weight is 7.4 kg at 12 months also. 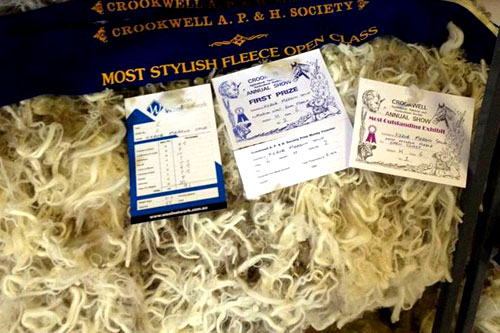 Because of our harsh winters we commence lambing around the 20th of September which lasts 5 weeks. Our property, Thalaba Downs, often snows and can be very cold throughout Winter-early Spring. Hence we lamb as late as possible to reduce lamb fatalities.

Our on-property sale date has been pushed back from October to early February which is not the status-quo for merino ram sales in Southern NSW. This was done for several reasons: